Located 300 miles Southwest from Anchorage, near the end of the Alaska Peninsula and along the crest of the Pacific Rim of fire, Katmai is today mostly known as the largest the spawning grounds of millions of Sockeye salmon, which attract the largest Brown bear population in the world. However, what prompted the creation of the Park was the eruption of Novaropta in 1912, the largest recorded in modern times. Acid rain burned clothing lines as far as Vancouver, and locally a lantern held at arm's length could not be seen for days. The floor of a vast Valley was buried in 700 feet of pumice and ash, and its surface was found by a 1916 National Geographic expedition to be steaming with thousands of fumaroles, hence the name Valley of Ten Thousand Smokes. Nowadays, the fumaroles are gone from the valley floor, however nearly a century of harsh weather has enhanced its beauty, and one can now gaze into river canyons hundreds of feet deep where the layers of pumice and ash have been slowly eroded by the channeled rain and snowmelt.

You have probably seen images of a brown bear catching a salmon flying mid-air. It is almost certain that the photograph was made at Brooks falls. There is an observation platform where you stand just in front of the bears, and a modest telephoto is sufficient to take a good picture. Nowhere else it is as easy to view them, and often inadvertently encounter them on the trail or on the lake beach. While all visitors spend some time to admire those magnificent animals, and sometimes take the four-wheel drive bus for a tour to an overlook to watch the Valley of Ten Thousand Smokes, Eureka Wang and I set up to backpack in the Valley for a week. Although bad weather thwarted our attempts to climb the high peaks surrounding the valley, we left with memorable impressions of an eerily unique landscape. See also the pictures of backpacking. 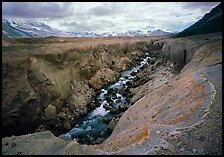 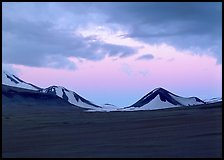 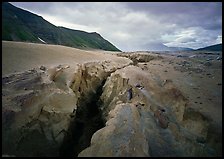 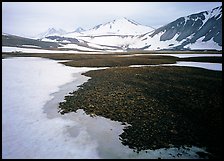 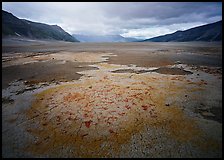 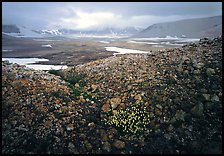 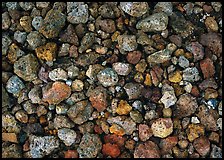