The Golden Gate bridge is named for the strait it crosses, the opening where the San Francisco Bay meets the Pacific Ocean, not for its color. It is generally accepted that the strait was named "Chrysopylae" or Golden Gate by Army Captain John C. Fremont, circa 1846. It is said it reminded him of a harbor in Istanbul named Chrysoceras or Golden Horn.

Declared one of the modern Seven Wonders of the world, when completed in 1937, after a four-year construction, it was the longest single-span (suspension) bridge in the world (1.2 miles, 2km), and remained so until 1964. It also had the world's tallest suspension towers (746 feet, 230 m) at the time of construction, and held that record until more recently. The Golden Gate bridge is easily America's most photographed structure, and the most photographed bridge in the world. It is photogenic at any time of the day. Its distinctive orange vermilion color (chosen to blend with the span's natural setting in clear weather, as well as to look good in fog), makes it one of the most recognizable landmarks in the world. Maintenance job consists of repainting the bridge (a continuously ongoing task) and replacing the 600,000 rivets in each tower that have been corroded.

Besides the bridge itself, the Golden Gate is also made spectacular by the flow of the summer fog, which is quite a unique phenomenon to observe. Created by the huge temperature differences between the California interior central valley, and the masses of cold Pacific water, a thick band of fog rolls in exactly at the Golden Gate (see also this aerial view). At first, the band is low enough that usually the top of the pillars of the bridge still emerge. After a while, the whole area, that used to be warm and sunny becomes damp and cold. 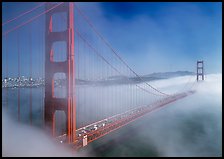 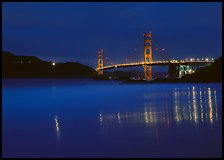 All text and photos © QT Luong. See conditions for use of images.
All the 63 color pictures of Golden Gate Bridge are on this page