Chiang Mai is Thailand's northern capital. It is the country's second largest city, but while Bangkok has a population of more than 6 million, Chiang Mai's only a quarter of a million. It is a pleasant and vibrant city, which has more than 300 temples in which some Burmese architectural influence can be seen. It is particularly nice to bicycle around. Longer term visitors appreciate it as a cosmopolitan place with a well developped tourist infrastructure, and a center for arts, crafts,cooking, and massage. The surrouding hills are populated by several hill tribes, many of which can be found selling their wares at the interesting Night Bazaar, a great place to shop for Thai (and even designer) goods.

The hills around Chiang Mai are pleasant to explore in a rented motorcycle. They are home to a number of hill tribe villages. Although Do Pui village has undergone significant development (ie is somewhat of a tourist trap), there are still traditional dress and housing to be seen there. Striking for its location and its brillant gold chedi, Wat Phra That Doi Suthep is one of the most sacred pilgrimage sites in the country. Its location in the mountains ("Doi"), a place formerly inhabited by an hermit named Sudevoy, was chosen by an elephant carrying some buddha relics ("Phra That"). 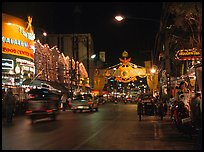 All text and photos © QT Luong. See conditions for use of images.
All the 25 color pictures of Chiang Mai are on this page