Stockholm is one-third water, one-third architecture, and one-third green. The capital of Sweden is protected from the open seas by the Skargarden, an archipelago of thousands of islands and islets. The town, being stretched over fourteen islands has many waterways which comprise a third of the city area. Another third is made of parks. The most pleasant views are from the water edge, but there are also the old streets of Gamla Stan (the historic center of the city), as well as the parklands of Djurgarden, which include Skansen, the prototype of the open-air museum, which has reconstitutions of rural and urban buildings from all around the country. Gamla Stan, literally "old town", is the island where Stockholm began in the 13th century. It is a district of winding narrow alleys and old buildings which includes churches and the Royal Palace. 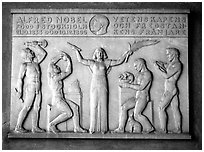 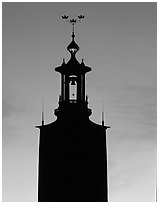 All text and photos © QT Luong. See conditions for use of images.
All the 34 black and white pictures of Stockholm, Sweden are on this page