Lijiang, possibly the best preserved old town in China, is one of the last places in this country where a visitor can witness and experience a historic, traditional urban culture. Remarkably, the old houses with stone foundations, plastered whitewashed brick walls, red wooden doors, shutters and balconies, and sloping tiled roofs, survived a recent earthquake without much damage, while the new concrete buildings were flattened. Adding to the charm of the narrow, winding, mostly pedestrian cobblestone streets is a network of canals. They are fast flowing from the Black Dragon Pool, a nice park with some interesting temples and a great view of the nearby Jade Dragon Snow Mountains.

Lijiang is home to the Naxi, a minority matriarcal culture originating from Tibet. The Dongba, Naxi shamans of a religion which is an almalgalm of Tibetan buddhism, Islam, and Taoism, created more than a thousand years ago a writting language consisting of more than 1300 pictographs. It is the only hieroglyphic language still in use. There are interesting foods to try, as well as traditional music to hear. The old town is a UNESCO World Heritage Site. Lijiang is in Yunnan, 570 km north-west of Kunming. It can be reached by air or road (a couple of hours from Dali, a full day to Jinjiang, the railhead). 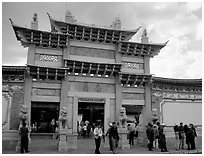 All text and photos © QT Luong. See conditions for use of images.
All the 89 black and white pictures of Lijiang are on this page