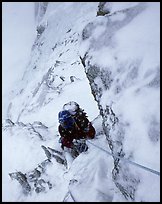 On the Nose of El Capitan,
and the North Face of Les Droites


I never had any regular partner. I just happen to climb with whoever is available, with whom I get along well, and has the same goal. There are many people who can fit this description. Since there is a large variety in climbing, there is probably no single person who fits it all the time. However, in my ten-year climbing life, the person who has come the closest to being my regular partner was Frank Levy. I met him at a class taught by Godefroi Perroux where we both learned waterfall ice climbing. He was sincere and direct, easy going, original but focussed, so I liked him.

I still remember that when he called me on the phone, it often started with "Allo glacieriste, ici rochassier...", and then a loud laugh would follow. As far as climbing went, we made a good team with complementary abilities. Together, we went ice-climbing or rock climbing a couple of times. However the area where he was always ready to go were the big routes in the mountains, for which he really had a passion. Although he lived for a while in Fontainebleau, he never got hooked into bouldering because there were not just enough height and adventure for him in this form of climbing. But when I was looking for someone to do something in the Mont-Blanc range, whenever he was able to free himself from his studies (he ended up being a math teacher after completing college and certification), he would always be interested. Our first climb together was a winter ascent of the Swiss route on the North Face of Les Courtes. Then, among other hard classics, we attempted together Les Droites three times. The first time, we went midway up the Tournier Spur Direct, but got off route and eventually retreated. The second time, when we woke up, there were two feet of fresh snow on the ground, so we went back to sleep, and post-holed our way directly back to the Valley from the hut. The third time, we eventually climbed the Ginat route, still considered to be the hardest route on the North Face, in the course of a 30 hour continuous effort during which we were at one point pinned down by a winter storm.

I was not able to be as available for Frank's projects as he was for mine, partly because I was worried about holding him back. I thought that he was such a better rock climber than I was, and besides he was almost always in better shape, thanks to his natural athletic abilities and his training as a cross country runner. I remember he had invited me one summer to join him for the Peuterey Integral, but I prefered to tell him that I was not feeling ready at that time. So he asked me for advice about which type of light rope to take to do the fearsome rappels down the Aiguille Noire (he liked to talk with me on the phone before going on one of his projects) and then soloed the route, the longest and one of the most commited climbs in the Alps, in a perfect style.

Then, I moved to California. Frank kept on doing commited alpine climbs in the Alps, sometimes with considerably weeker partners, but he was now looking forward to enlarge his horizon. I had the pleasure to have his visit in Yosemite in April 1994, and it was with him that I had my first big wall experience on The Nose, at a time when it was still difficult for me to find climbing partners locally. Although I hadn't seen him for almost three years, he had not changed. He was still as enthusiastic as before, and also very vocal and hot-tempered when our ropework was less than perfect on our first big wall. But this was more than compensated by his very original sense of humor. He had always new jokes. It was his determination which got us up the wall in spite of our relative inexperience in this type of climbing. When I dropped him at the San Franciso airport, it was the last time I saw him. The next news that I had from him was a letter where he described his first himalayan experience. For his first expedition, he managed to climb the North face of Hidden Peak, a 8000m peak by a relatively technical route, in only two weeks after the arrival to base camp. It seemed so easy for him that he even considered staying a bit more to do an improvised bid on K2, but then the weather turned bad

I wrote to him last Christmas, and along with my greetings, invited him to join me on an attempt at the first repeat of the Hummingbird Ridge on Logan, lightweight style. Of all the people that I know, he was the one with whom I would have felt the most confident for such a bold proposition. I was somewhat surprised not to hear from him, because although he was not very found of writing letters, he was a very faithful friend and always replied to me. In May, I received a letter from his parents, who had found my address on the Net. Last summer, just before leaving for an expedition on Makalu, his ultimate preparation in the Alps was a link-up of four 4000m peaks in the Monte Rosa range. On the slopes of the Nordends, he was struck by a falling rock. I will miss not only a remarkable alpinist, but also a most attaching friend.